The Prix Pierre Joseph Redouté, dedicated to the best gardenbook

A literary Prize was created in 2000 in honour of the great 18th century Flower painter Pierre-Joseph Redouté, for the best French gardening and botanical books of the year.

Organised by the Association des Jardins du Maine (JASPE), the Pierre-Joseph Redouté Prize is awarded every year in the Loire Valley, the first week-end of June at the Château du Lude during the Garden festival.

The Pierre-Joseph Redouté Prize is awarded by an experienced and discerning Jury:

To celebrate the 250 years of Pierre-Joseph Redouté’s birth, a new rose ‘Prix Pierre-Joseph Redouté’ was created in 2009 by the rose specialist Guillot, whose origins date back to the famous painter’s time.
The winners and runner-ups join the Garden festival at the château du Lude, for book signings, workshops and talks on some of the great figures and topics in gardening.

The Sarthe Conseil départemental, The Regional Council of the Loire valley, Radio France Bleu Maine, Néopost, TRUFFAUT, Média Participations, Bourg Joly Malicorne, all give their encouragements and support to the Pierre-Joseph Redouté Prize. 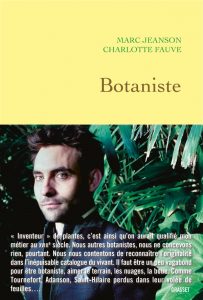 Marc Jeanson is botanist and agronomist. He was director of the Herbarium of Montpellier and is now in charge of the Herbarium at the Muséum National d’Histoire Naturelle at Paris.
Charlotte Fauve is landscape engineer, journalist and documentary authos.

The biographical account of Marc Jeanson is the occasion to mention some great figures of botanists and explorer who served France. The main hero is the Herbarium of the Museum.
The book is an hommage to these great inventors of plants : Tournefort, Adanson, Lamarck, Pierre Poivre, Gérard Aymonin, Léon Mercurin. The plants are not in the books or under a glass, they are our world, our climatic history, our landscapes, our future.

6 other books were reward in different categories: